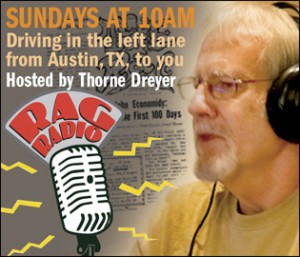 Rag Radio with Thorne Dreyer
Driving in the left lane

Rag Radio with Thorne Dreyer features hour-long in-depth interviews and discussion about issues of progressive politics, culture, and history. The show is produced in the studios of community radio station KOOP-FM in Austin, Texas, in association with The Rag Blog and the New Journalism Project, a Texas 501(c)(3) nonprofit corporation.

Host and producer Thorne Dreyer, who lives in Austin, also edits the progressive internet newsmagazine, The Rag Blog. Dreyer, a pioneering Sixties alternative journalist, was a founding editor of two of the era’s most influential underground papers — The Rag, in Austin, and Space City! in Houston. He was also an editor at Liberation News Service (LNS) in New York, and was general manager of KPFT, the Pacifica radio station in Houston.

Tracey Schulz, a programmer at KOOP in Austin, is co-producer and engineer at Rag Radio.

Rag Radio and The Rag Blog are a digital age reincarnation of The Rag. Published in Austin from 1966-1977, The Rag was one of the earliest and most influential of the Sixties underground newspapers; historian Lawrence Leamer called it “one of the few legendary undergrounds.”

Although Rag Radio is produced for a national and international audience, it often taps the rich and storied tradition of Austin, Texas. Long a center for progressive politics and cultural iconoclasm, Austin was a birthplace for the psychedelic music phenomenon and the underground press and comix movements of the Sixties — and the University of Texas at Austin was a center for the Sixties New Left and resistance to the War in Vietnam.

Austin, now also a hub for high-tech innovation, is an independent film production center and is known as the “live music capital of the world.” It is home to the annual SXSW music, film, and interactive festival – the largest music industry event in the world – and Austin City Limits, the longest running music series in American television history. (Austin, the Texas State Capital, is also home to some of the most disreputable politicians on the planet!)

All Rag Radio shows are available as downloadable podcasts at the Internet Archive. We can be contacted at ragradio@koop.org.