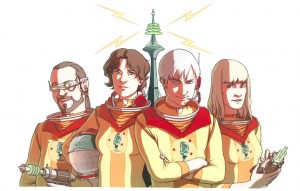 Big Picture Science is a one-hour radio magazine and podcast that examines life and technology on this planet… and beyond.

Gary Niederhoff is a member of a group of visitors from Vega who are tired of being referred to as “vegans” (the preferred term is “Vegamatic”).

Gary joined the staff of “Big Picture Science” in order to learn more about both the human understanding of science and the basics of pun construction. Seth and Molly have learned that he will also edit audio, write blog posts, and book guests in exchange for coffee and M&M’s. His voice is frequently heard on the show, sometimes depicting historical figures such as Galileo, Einstein, and Archimedes, and other times portraying such lovable characters as ‘spacey lawyer’, ‘Dan the computer’, and ‘egg’. He also occasionally takes to the streets of Mountain View to ask complete strangers about their beliefs and opinions of the show’s topic of the week, and you may have even heard him surreptitiously providing information about how you can join Team SETI.

Gary has worked in community radio in the bay area for nearly 20 years, producing on-air programs as well as administering fund raising activities and station events. He spends his spare time communicating telepathically with his cats, from which he’s learned that birds are very interesting and that tuna is delicious.

Molly oversees the production of Big Picture Science. She’s worked in public radio for 20 years, half of that as a science journalist BBC Science Radio, including World Service, Radio 4 and Science/Nature Online. She has also written for New Scientist. She teaches a course on writing for radio and producing podcasts at the University of California, Santa Cruz Science Writing Program.

She’s been an invited participant to a number of workshops about helping scientists communicate more effectively with science journalists, including: the Aldo Leopold Leadership Program, Switzer Environmental Fellowship workshop, and the Scripps Institution of Oceanography Science Communication Workshop, sponsored by the Metcalf Institute and funded in part by the National Science Foundation.

She attended M.I.T.’s Knight Science Journalism workshops in 2007 and 2010. Her radio career began when she wandered into Wisconsin Public Radio one day and landed a job answering the phones for the early-morning call-in show, then graduated on to assistant producer of the national radio magazine, To the Best of Our Knowledge.

Seth Shostak is the Senior Astronomer at the SETI Institute, in Mountain View, California. He has an undergraduate degree in physics from Princeton University, and a doctorate in astronomy from the California Institute of Technology. For much of his career, Seth conducted radio astronomy research on galaxies, and has published approximately fifty papers in professional journals. He also founded and ran a company producing computer animation for TV.

Seth has written several hundred popular magazine and Web articles on various topics in astronomy, technology, film and television. He has edited and contributed to a half dozen books. His first popular tome, “Sharing the Universe: Perspectives on Extraterrestrial Life” appeared in 1998. He has also authored “Life in the Universe” (2006, 2nd edition, textbook, with Jeff Bennett) and “Cosmic Company” (2003, with Alex Barnett). His most recent book is “Confessions of an Alien Hunter” (2009).

Seth is the host of the SETI Institute’s weekly science radio show Are We Alone?, which reaches listeners both on the air and via internet podcast.