The Sautners from Dimock put up a billboard that has a picture of their dirty water and the words “FIX IT” on Rt. 29 in the heart of Cabot Oil & Gas territory.

As soon as it went up, they held a press conference. Angry pro-gas neighbors were also there – and Cabot spokesman George Stark. The TV coverage of the story did not show the “Fix It” billboard. Odd?

The Kelly family, owners of the property [also owners of PJ’s Restaurant and Bar at the site] said that they wanted it taken down because . . . they didn’t want to offend part of their customer base, which are gas drilling workers.

Victoria Switzer says her water supply was ruined by a drilling operation. She supported the billboard but she says she’s not surprised it was removed. Victoria says, “I would expect that there are some people out there that are shocked that the sign is coming down . . . that this is the kind of climate of fear that we are living in. I would like to think that we’ll get a sign up somewhere else.

Switzer says the move to take it down shows the impact and control gas companies have over communities. 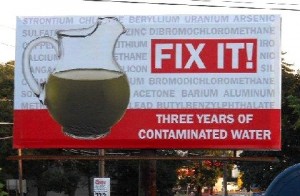